This is a week long summit with a wide variety of specialists and it’s free! If you, a friend or family member have Celiac Disease or if you are newly diagnosed and confused, you should definitely tune in to this free summit. http://theglutensummit.com

Do something today to help raise the awareness of Celiac Disease. This can be as easy as talking to one person about Celiac, then they tell someone and so on. Also, I think it’s important to remember that there are so many people that have not been diagnosed and are feeling ill. So please take a minute out of your day to send out good energy or a prayer for all of those people who are suffering , and are being told that nothing is wrong with them , yet no one has tested them for Celiac Disease.

Have a healthy Day!

Summer/Fall 2012… Frank Baldassare from the gluten free cooking show The Missing Ingredient featured in the PBS special “Gut Check.” Check with PBS for times and dates in your viewing area.

With a sparkle in his eye and an infectious smile, Frank Baldassare, LMT (’91) and his dog Rowdy welcome visitors to his online cooking show “The Missing Ingredient.” In Frank’s case, the ingredient that you won’t find in his food is gluten.

According to the Celiac Disease (CD) Foundation, gluten is a common name for the proteins found in all forms of wheat (including durum, semolina, spelt, kamut, einkorn and faro) and related grains rye, barley and triticale. When people with CD eat foods that contain gluten, it creates an immune-mediated toxic reaction that causes damage to the small intestine and does not allow food to be properly absorbed.

Frank had been a trainer at a Jack La Lanne fitness center, and then head of fitness for a resort in St. Lucia, when he decided to enroll at Swedish Institute. After graduating and getting licensed, Frank worked successfully as a massage therapist in a number of locations. He was working at a spa in the West Village when he got a call from the Peninsula Spa, which was just opening on Fifth Avenue. He was hired and stayed for ten years, becoming head of the massage therapy department and being nominated “Best (massage therapist) in the business” by Vogue magazine in 1998.

A Sudden Change
Frank thought he was living a healthy lifestyle until one day he woke up with symptoms he couldn’t explain. “My illness seemed to come out of the blue,” Frank said. “The first sign was trouble with my eyes; my tears became very viscous. Things got progressively worse. I got tired, I had terrible headaches, a kind of neuropathy in my legs, and I was losing weight. I dropped 26 pounds in five to six weeks.”

He went to see specialists who ran tests, but results came back negative. Frank knew he wasn’t healthy, so he had to aggressively pursue a diagnosis.

“I went back to the basics in physiology, pathology and Shiatsu that I learned at Swedish Institute,” Frank recalled. “For instance, I used to be able to do a good straddle stretch and found I couldn’t open my legs anymore. It made me wonder if something was going on with my Liver and Gall Bladder channels; I started to think about my digestive system.”

Frank read everything he could on digestion and the immune system. “I went to one doctor who was supposedly treating conditions naturally,” Frank said, “but he just gave me a slew of vitamins. That didn’t make sense to me; if I wasn’t digesting food properly, how was I going to break down pills?”

Frank did his research and like many people with a chronic disease made the round of doctors. “Finally, I brought all my records to a doctor who had once helped me with a parasite,” Frank said. “He asked me why anyone hadn’t checked me for celiac disease. Blood work showed I had antibodies for it, and my IgA levels were high. The gold standard for determining the presence of celiac disease, an endoscopy, confirmed the diagnosis.

“With celiac disease there is a blunting of the villi in the small intestine. This is a very important area, where vitamins and minerals are broken down and absorbed. If there’s a problem here, you’ll have vitamin deficiencies that supplements alone will not fix.”

Celiac disease interrupts the absorption of fat-soluble vitamins A, D, E and K, which has a negative effect on bone and skin health. Frank had been suffering with osteoporosis, chronic fatigue, and hair and nail problems, all of which he attributes to the deficiencies created by the celiac disease.

The Solution
“Thank goodness I have dogs, because I walked every day,” Frank said about the reversal of his illness. “I took out any inflammatory foods and beverages. Following a gluten-free diet didn’t help immediately. The villi take time to heal.

“I added other therapies—regular sessions in Chinese medicine, massage and acupuncture—because when you’re fighting the inflammation, you have to get the debris out of your body. When you’re healing you need touch!”

As Frank learned more, his innate affinity for people led him to create programs to share his knowledge. “I created a show for people with food sensitivities—there are more allergies and food disorders and obesity than ever. Food Network loved it, but wasn’t ready for it. So I put it online for free at themissingingredienttv.com.

“What I learned is that there’s no one answer. It’s a mindset first. Then find the people who can help you. It does mean a lifetime adherence to a gluten free diet. Remember though, that just because it’s gluten free doesn’t mean it’s good for you.

“I’ve really gone back to a hunter-gatherer diet. The days of grabbing food anywhere are over. I don’t have any struggle to stay away from fast food; it doesn’t even enter the equation as an option anymore.”

Frank, because of his upbeat personality, is often asked to lecture at conferences about celiac disease and allergies. He has gone to public schools to talk about food allergies and turn young people on to tasty alternatives to wheat. He has also set up basic nutrition programs for people living with mental illness.

“People who are living with mental illness are on a budget of about $250 a month for food. So they need a way to think about food that’s simple and inexpensive. I took them shopping, showed them how to pick produce, taught them how to cut up a chicken and make five individual meals. We boiled the chicken bones to make stock, which they used through the weeks.

“I thought that a gluten free diet might also help them. It’s such a basic diet that anyone preparing food for it will not be overwhelmed. And it helps people avoid the mood swings that often come when the diet is too rich in carbohydrates, sugar and processed foods.”

Frank Baldassare does not have chronic fatigue today. He has plenty of energy and shares it freely via his television program, lectures, articles and in an upcoming DVD. It’s all part of his Healthy Entertainment empire, which he envisions as a vehicle for a wide range of creative projects which focus on helping people in their journey towards health and happiness.

Frank Baldasssare was a guest speaker at The Celiac Foundation Annual Educational Conference and Food Faire in L.A, May 2009, 2010 & 2011.

Frank Baldassare creator and host of the Missing Ingredient(tm) instructs a three day gluten-free MISSING INGREDIENT workshop on how to stretch your food dollar to members of Fountain House in N.Y.C.

Workshop for the International Center for Clubhouse Development 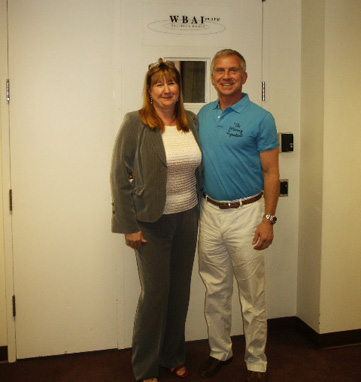 Frank Baldassare with Pauline Anderson, Director of Development for the International Center for Clubhouse Development which provides services for people living with Mental Illness. Frank has designed a gluten-free workshop for their wellness unit which teaches people living on a fixed income how to eat healthy, and stretch their food dollar.

Frank Baldassare creator and host of The Missing Ingredient ™ interviewed by Diana Mason producer and host of Healthstlyes on WBAI 99.5 F.M

Frank Visits with 3rd and 4th Graders at PS/MS 287

Frank Baldassare, host and creator of The Missing Ingredient ™, visits with the 3rd and 4th graders at PS/MS 287 Inwood N.Y.